"Debug hardware like the pros with the logic analyzer you'll love"

Logic analyzers are great for debugging embedded applications. In the most common case, a developer working on firmware for a microcontroller will write code to communicate with another component, possibly using protocols like serial, I2C, or SPI. To verify the functionality or to diagnose errors in the firmware, a logic analyzer is connected to the digital IO used for communication and records the activity during testing. The recording is then shown on the display so the user can view the actual behavior of the firmware, and compare that with the expected behavior to narrow down and identity the source of the issue-or verify that the operation is correct.

The Saleae Logic Pro 16 USB Logic Analyzer is a 16 channel logic analyzer with each input dual purposed for analog data recording. The device connects to a PC over USB and uses the Saleae Logic Software to record and view digital and analog signals. In addition, Logic currently has 24 different protocol analyzers including serial, I2C, SPI, CAN and many more.

Logic accepts voltages from -.5V to 5.25V, and has standard CMOS thresholds of .8V for logic low, 2.0V for logic high. Input impedance is approximately 1M ohms paralleled by 10pF. 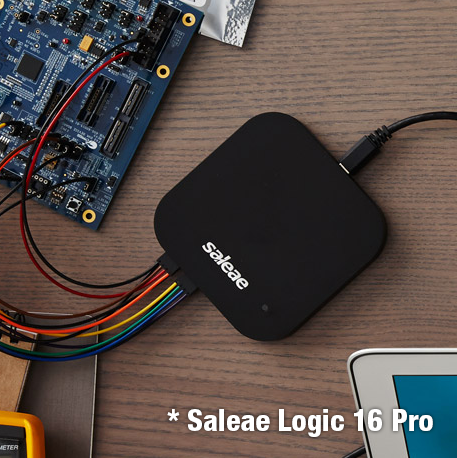